Girl stabbed to death on her way to school

A man was arrested for killing a 16-year old-girl on her way to school in Birmingham.
In Birmingham, in the center of West Midlands, a school girl was murdered. The girl was going to school on the bus. Then, on the next stop a passenger stabbed her with a knife and ran out of the bus.
Witnesses called the police and ambulance, and also tried to give first aid. Even with all the effort, the girl died.
The police started immediately to search for the killer. They managed to arrest a suspect in the city center just a few hours after the incident.
The tragedy shocked the whole of Birmingham.

A cyber attack on south Korean broadcasters came from an address in china but the identidy behind it cannot be confirmed.
The telecoms regulator said hackers used a chinese address to plant a harmful code to hit six organisations.
Around 32,000 computers at six organisations had been affected.
North Korea has been blamed for previous cyber attacks to south Korea in 2009 and in 2011.

South Korean communication regulators said
"Unidentified hackers used a Chinese address to contact the servers of the six
organisations that were affected and plant the virus which attacked their computer. At is stage, we're still making our best efforts to trace the origin of attacks, keeping all kinds of possibilities open" they said.
Officials stressed that they did not know who was behind the attack, as hackers can route their attacks through addresses in other countries to hide their identities.
The discoverey has strenghthened that north Korea was behind the attacks. Experts believe that North Korea routinely uses Chinese computer adresses to hide its cyber attacks. 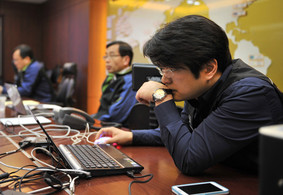 One dead in level crossing crash

One person died when a train hit a car on a level crossing in Somerset.
The crash happened at about 06:30 on the Stanmoor Road crossing near Athelney.
Network Rail suggested the barrier was lowered and the driver tried to weave around them in order to cross.
Network Rail said no train passengers have been injured in the crash.
Fire crews are at the scene to remove the vehicle from underneath the front of the train.
John Baker from Network Rail said: "The 05:46 train from Exeter St Davids to Paddington has hit a car on the automatic half-barrier level crossing in Athelney - there is one fatality."
Aaron Mead, who lives 100 yards from the scene, said he heard an "almighty bang".

A British woman has been injured after jumping from a hotel balcony in Agra ,India, to escape from harassment.
The thirty year old woman had asked for a 4:00 wake up call after the hotel owner came to wake her he then asked if she wanted a massage. She told the police he would not leave her so she locked the door and jumped from the balcony to the floor below injuring her leg in the process she then fled the hotel.
The police have arrested the hotel owner and charged him with sexual harassment. His court sentence is on Wednesday.
The hotel owner claimed that he had went to her room to wake her up as the hotel staff were ringing her on her intercom and she was not responding.
The Foreign Office have updated some advice after this incident and said that women going to India should not travel alone on public transport, especially at night and should take caution .
There was more reported cases of sexual assault against women and young girls in tourist areas and cities. Foreign women are also at risk.

The half-tonne creature crawled out of the water in the beach resort of Balneario Camboriu in the southern state of Santa Catarina, then found its way onto the town's main road.
Traffic ground to a halt for 20 minutes as the three-meter long sea lion slid across the busy road.
It may have been the animal's first foray onto a main road, but it did obey the law by using a zebra crossing to make its way across the street.
Police and firefighters threw water over the sea lion to keep it wet until it returned to the water an hour and a half later.

A student at New York University has invented a gel that accelerates the process of healing any wounds.
Joe Landolina, invented a special gel that binds tissue cells and promotes rapid blood clotting.
According to him, this substance activates the process of blood clotting, which helps speed up the healing of wounds.Moreover, the gel can be used not only for small cuts, but also to restore the internal organs, as well as the strengths of arterial bleeding.